Jacki Master Skater Of The Year 2013 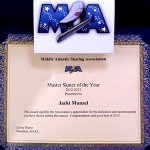 Jacki was recently awarded by the Middle Atlantic Skating Association as Master Skate of the Year for 2012 – 2013.

A little about MASA:
MASA’s main purpose is to support and promote speedskating and its clubs within the boundaries as governed by US Speedskating (currently encompassing the lower New York Metro region and as far north as Newburgh, Connecticut and New Jersey), and is run by a board of volunteers who are all participants and supporters of the sport. There are currently four clubs in three states.